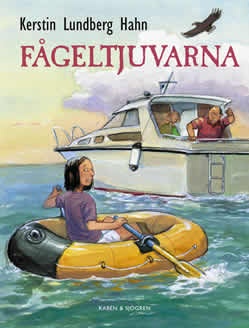 There’s a tiny island off the coast, not far from Kajsa’s granny’s house. On the island there’s a tree with an old abandoned eagle’s nest.
Abandoned? No, not anymore. When Kajsa tries out her new pair of binoculars she discovers the new inhabitants – two eagles with a chick that’s just been hatched.

But what’s that white motor boat doing so near the island? Are they really just fishing?

Author’s note:
Of course this is not only a book about adventurous and brave kids, but also on another level about the relationship between man and nature. I would like for kids who read this book to be strengthened in their love of nature. Because what we love we are more likely to protect.