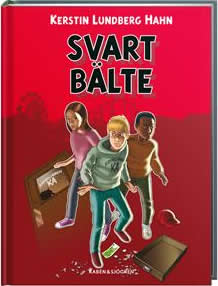 ”The sound of footsteps from upstairs makes Freddie freeze. The ice cold feeling spreads from his head and his neck to his whole body, paralysing him.
– Freddie Hansson, he says to himself. It’s the middle of the night and you’re inside the house of a thief who’s twice your size and carries a black belt in judo. You’re crazy!”

Freddie is so much looking forward to the trip to Budapest with his judo club. But then someone steals the ticket money. Freddie can’t hide his disappointment. But their coach doesn’t seem to mind that much … and what about that violent guy, Nikos, who was having a fight with the coach?

Freddie’s new friends Zac and Mimmi want to help him. But at the same time there are things they don’t want to tell each other, and so they end up in deep trouble.